Tyrrell Hatton still remembers the shot. He’s about five or six years old, playing in the Wycombe Heights Junior Masters. He’s up against a much older boy, and it’s gone to a three-hole play-off. About 100 yards to the pin. “I remember hitting a punch 8-iron,” he says. “I remember the shot, and I remember how close it went. Not even 18 inches to the hole. And I ended up winning the tournament.” 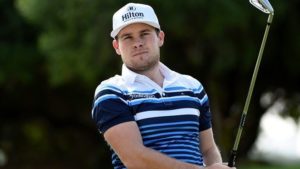 And thus begins the story of British golf’s newest and most exciting young talent. They fitted little Tyrrell out with a little green jacket. It was his first title, and he quickly developed a taste for them. Now, two decades on, he gets a text from his manager every Monday with his new world ranking. It currently stands at No17, after a dreamy autumn in which he has won two titles on the bounce and put himself in pole position to qualify for next year’s Ryder Cup.

A Lamborghini is now parked in the driveway of the modest semi-detached house in Marlow where he grew up. Making a success of professional golf has changed the life of Hatton and his family, and yet he admits he can still walk down the street without a soul recognizing him. He might find it a touch more difficult this time next year. With his scintillating short game and exuberant on-course celebrations, Hatton is pure box office, golf’s best-kept secret, perhaps even the future of golf in this country.

And yet, his rise has not delighted everyone. Golf’s occasional and curious tendency to declare itself not simply a sport but a sort of moral arbiter has seen Hatton’s on-course demeanor attract more than its fair share of criticism. Former European Tour pro Gary Evans recently tweeted that Hatton needed to “grow up” and that his “on-course winging and body language is a disgrace”.