Russell Knox (born 21 June 1985) is a Scottish professional golfer who plays on the PGA Tour. He had considerable success from 2014 to 2016 during which time he won the 2015 WGC-HSBC Champions and the 2016 Travelers Championship. Together with three runner-up finishes and three third-places on the PGA Tour, he was a runner-up in the 2016 Dubai Duty Free Irish Open and reached a career-high 18 in the world rankings at the end of 2016. Knox joined the European Tour at the start of 2016 but just failed to gain an automatic place on the 2016 Ryder Cup team and was not chosen as one of the captain’s picks. 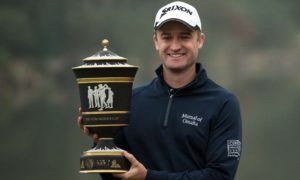 Knox was born in Inverness, Scotland. His father was born in San Diego, California. He attended Culloden Academy. Knox signed with the sports scholarship agency FirstPoint USA in 2002[1] and helped Knox to secure a golf scholarship in 2003 at Jacksonville University, Florida. He married Mexican former tennis player Andrea Hernandez in April 2014. Knox’s parents live in the States. The only family member living in Scotland is his sister Diane Knox, a former radio presenter on Clyde 1, who lives in Glasgow.[2]

Knox turned professional in 2007. He played on the NGA Hooters Tour from 2008 to 2010, picking up two victories in the process. He joined the Nationwide Tour in 2011 and picked up his first victory on tour in July at the Chiquita Classic. He eventually finished 12th on the Nationwide Tour money list and gained his full PGA Tour card. His first PGA Tour event was the 2011 Transitions Championship but he failed to make the cut. His first PGA Tour event as a full member was the 2012 Sony Open in Hawaii where he missed the cut by a single stroke. He made only 12 cuts in 23 events in 2012 and finished 143rd on the money list to remain conditionally exempt on the PGA Tour for 2013. On 26 July 2013, Knox shot a 59 in the second round of the Albertsons Boise Open on the Web.com Tour.[3] He split his time between the PGA Tour and Web.com Tours in 2013. He played in the Web.com Tour Finals and finished 20th to earn his PGA Tour card for 2014.