Hill Climb Racing is a 2012 2D physics-based racing video game released by the Finnish studio Fingersoft for Android, iOS, Microsoft Windows, and Windows Phone. It was originally created by Toni Fingerroos, Fingersoft’s founder, and is the company’s best-known product. The player controls a driver across hilly terrains, collecting coins along the way and spending them on vehicular upgrades while being watchful of the driver’s head as well as the vehicle’s fuel supply.

The game received generally somewhat favorable reviews. Critics tended to describe the graphics as being rudimentary at best or ugly at worst and sometimes panned the gameplay as unimpressive, but the former was overlooked when they lauded the physics. Further praise went to the simplistic two-button controls and the freemium monetization model for its passive approach. Its success led to the creation of one sequel, Hill Climb Racing 2 in 2016, and in 2018, the Hill Climb Racing franchise became the second Finnish mobile game franchise after Rovio’s Angry Birds to amass one billion downloads. 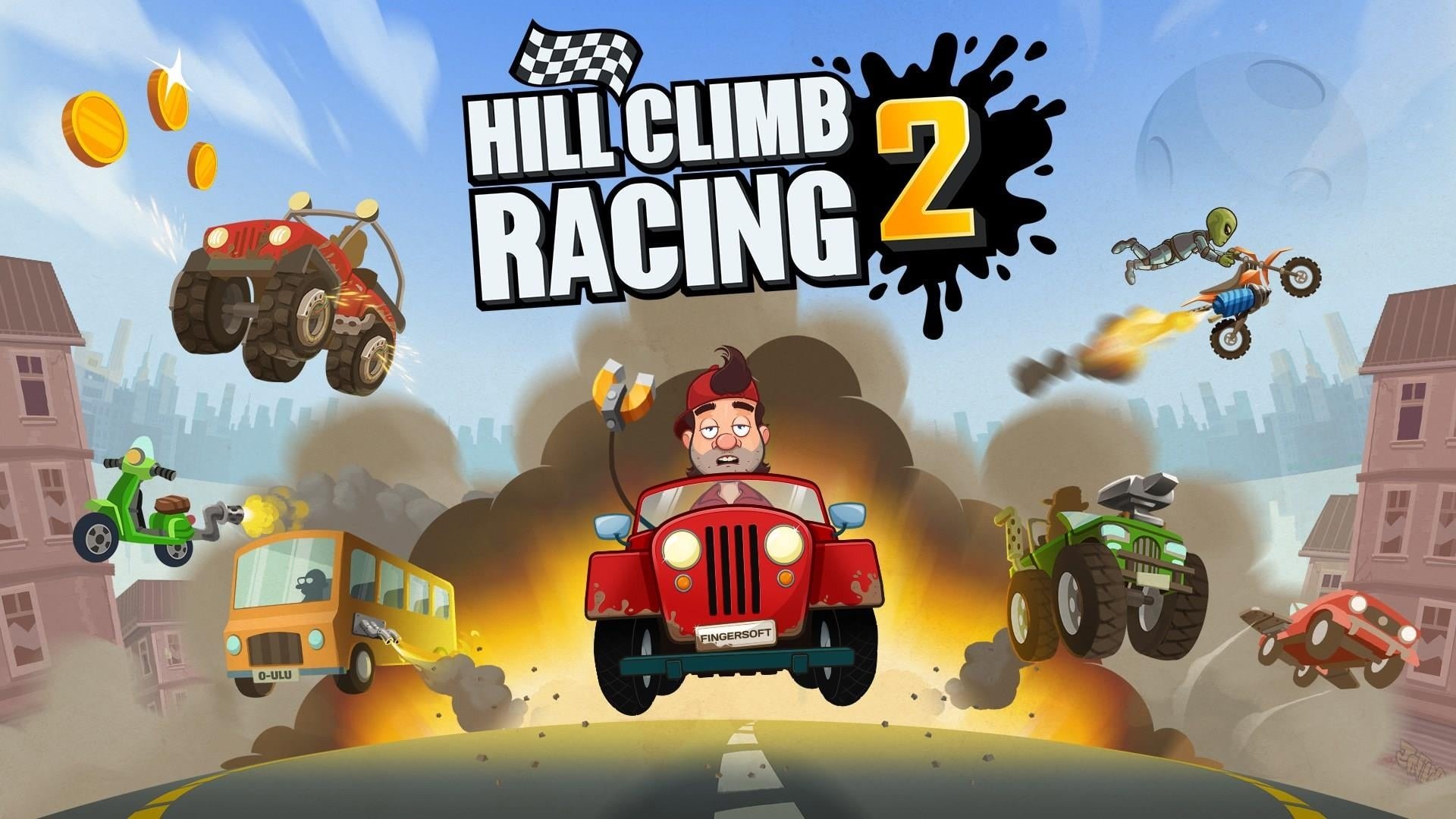 Screenshot illustrating elevation as the main aspect of the game. Throughout this course, coins are spread in groups, with some of them accompanied by fuel and gems (as shown on the center-right). The top-left portion of the screen comprises the fuel gauge and an inventory of coins and gems.
The object of Hill Climb Racing is to drive as far through progressively difficult racing stages as possible while collecting coins, taking advantage of the nonrealistic physics and using only two simple controls: the Gas and Brake pedals. Fuel is replenished by picking up gas canisters or batteries along the way. The player can perform stunts such as driving the vehicle into the air for a prolonged time or flipping it over to earn more coins, which after the race may be spent on upgrades or to unlock new stages and vehicles. Conditions ending the game are depleting the vehicle’s fuel or hitting the driving avatar’s head.

Since its inception, Hill Climb Racing has seen updates that add new content. For example, the garage was introduced in a December 2016 update, where players can purchase cars and tune their parts. Gems were also introduced as a currency of the game.

Development
Hill Climb Racing was developed by Toni Fingerroos, a self-taught Finnish programmer who was 29 years old at the time of the game’s release. Prior to the game, he started writing software at the age of ten. He was intrigued by car racing, and wrote Ralli 94 and shared it with his friends. At that time, when he thought that games were developed by firms and not by people, he named his own hobbyist firm Fingersoft.

A decade after his first game, Fingerroos revived the Fingersoft trade name as a professional studio that programmed games for Nokia mobile phones. Fingerroos described he “failed at that quite miserably.” He since pursued other occupations, all with unfavorable outcomes. One of them was working with Pixolane, a game studio, and spending his money on developing a PlayStation 3 game called Rust Buckaneers that was ultimately cancelled as the studio wasted its seed money, which caused him to accumulate debt. Another was repairing and selling sports cars imported from Japan and the United Kingdom, which also drained his personal savings. Fingerroos returned to and revived again Fingersoft in late 2011, where as the company’s sole worker, he designed a photography application every few days to see whether some of them would turn out to be successful. One of these apps was Cartoon Camera, released in February 2012 and having quickly amassed over ten million downloads. The app’s profitability strengthened Fingerroos’ confidence, helped him pay off debts, and secured the creation of his next project, Hill Climb Racing.

Fingerroos said he spent 16 hours a day for a couple of months developing Hill Climb Racing in a compact bedroom before completing the project. The sound assets were crowdsourced, and his friends and acquaintances drew the visuals. As Fingersoft’s business manager, Jarkko Paalanen, states, the visuals were intentionally drawn to be “naïve and childish”, as part of the game’s character. Bill Newton, the game’s protagonist, was drawn as a sketch by Fingerroos’ partner Pai Turunen. Fingerroos then photographed the sketch with one of the company’s earlier camera apps and modified it for the game’s inclusion. It was released for Android devices on September 22, 2012. Amid the game’s success, Fingerroos contacted Teemu Närhi, a former Pixoline employee, to port the game for iOS. That version was released on November 8, and the game was later ported to Microsoft Windows on October 21, 2013, and to Windows Phone on November 27.

Chinese version
Fingersoft had plans to localize Hill Climb Racing in China. They had already released the original game in that region in July 2014, in collaboration with MyGamez, a Finnish-Chinese game publisher specializing in marketing non-native mobile games to China. Paalanen saw an opportunity to appeal to the Chinese audience by altering the game’s theme to match their culture, while keeping the gameplay unchanged. Hill Climb Racing: China Edition was published by MyGamez in February 2015