Pac-Man is a maze arcade game developed and released by Namco in 1980. The original Japanese title of Puck Man was changed to Pac-Man for international releases as a preventative measure against defacement of the arcade machines. Outside Japan, the game was published by Midway Games as part of its licensing agreement with Namco America. The player controls Pac-Man, who must eat all the dots inside an enclosed maze while avoiding four colored ghosts. Eating large flashing dots called power pellets causes the ghosts to turn blue, allowing Pac-Man to eat them for bonus points. It is the first game to run on the Namco Pac-Man arcade board.

The development of the game began in April 1979, directed by Toru Iwatani with a nine-man team. Iwatani wanted to create a game that could appeal to women as well as men, as most video games at the time were war- or sports-themed. Although the inspiration for the Pac-Man character was, reportedly, the image of a pizza with a slice removed, Iwatani has said he also rounded out the Japanese symbol “kuchi”, meaning “mouth”. The in-game characters were made to be cute and colorful to appeal to younger players. The original Japanese title of Puckman was derived from the titular character’s hockey-puck shape. 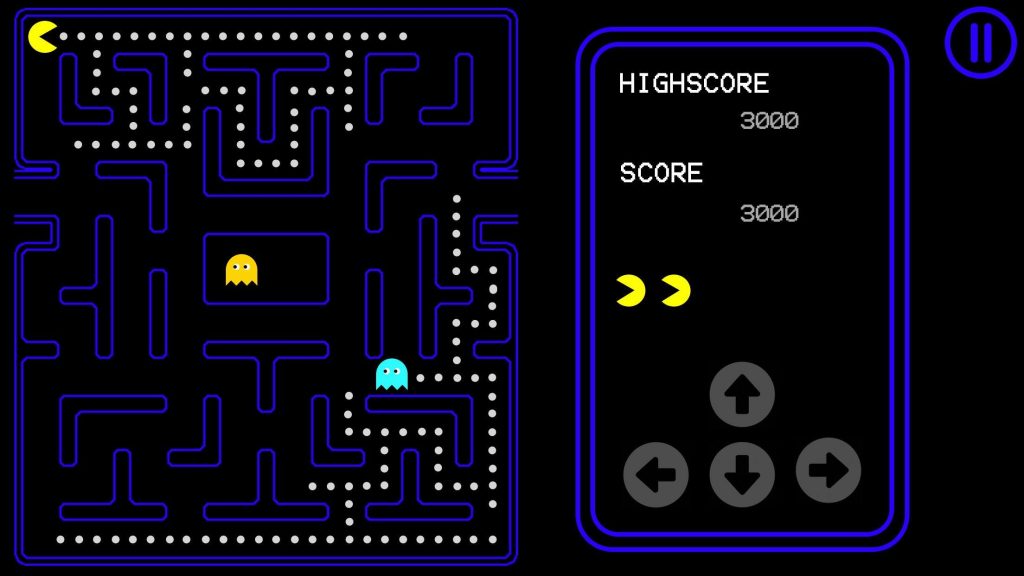 Pac-Man is a widespread critical and commercial success. The game is important and influential, and it is commonly listed as one of the greatest video games of all time. The success of the game led to several sequels, merchandise, and two television series, as well as a hit single by Buckner and Garcia. The Pac-Man video game franchise remains one of the highest-grossing and best-selling game series of all time, generating more than $14 billion in revenue (as of 2016) and $43 million in sales combined. The character of Pac-Man is the mascot and flagship icon of Bandai Namco Entertainment and has the highest brand awareness of any video game character in North America.

The player navigates Pac-Man through a maze with no dead ends. The maze is filled with Pac-Dots, and includes four roving multi-colored ghosts: Blinky, Pinky, Inky, and Clyde. There is a passageway from the left side of the screen to the right side, one energizer in each of the four quadrants, and bonus fruits that appear in each level.

North American title screen showing the names of the four ghosts and the value of the dots
The objective of the game is to accumulate as many points as possible by eating dots, fruits, and blue ghosts. When all of the dots in a stage are eaten, that stage is completed, and the player will advance to the next. Between some stages, one of three intermission animations plays. The four ghosts roam the maze and chase Pac-Man. If any of the ghosts touches Pac-Man, a life is lost. When all lives have been lost, the game is over. The player begins with three lives, but DIP switches in the machine can change the number of starting lives to one, two, or five. The player will receive one extra life bonus after obtaining 10,000 points. The number of points needed for a bonus life can be changed to 15,000 or 20,000 or disabled altogether.

Near the corners of the maze are four flashing energizers that allow Pac-Man to eat the ghosts and earn bonus points. The enemies turn deep blue, reverse direction and move away from Pac-Man, and usually move more slowly. When an enemy is eaten, its eyes return to the center ghost box where the ghost is regenerated in its normal color. The bonus score earned for eating a blue ghost increases exponentially for each consecutive ghost eaten while a single energizer is active: a score of 200 points is scored for eating one ghost, 400 for eating a second ghost, 800 for a third, and 1600 for the fourth. This cycle restarts from 200 points when Pac-Man eats the next energizer. Blue enemies flash white to signal that they are about to return to their normal color and become dangerous again; the length of time the enemies remain vulnerable varies from one stage to the next, generally becoming shorter as the game progresses. In later stages, the enemies begin flashing immediately after an energizer is consumed, without a solid-blue phase; starting at stage nineteen, the ghosts do not become edible at all, but still reverse direction. There are fruits that appear twice per level, directly below the center ghost box; eating one gives 100 to 5,000 points.