Grand Theft Auto V is an action-adventure video game developed by Rockstar North and published by Rockstar Games. It was released in September 2013 for PlayStation 3 and Xbox 360, in November 2014 for PlayStation 4 and Xbox One, and in April 2015 for Microsoft Windows. It is the first main entry in the Grand Theft Auto series since 2008’s Grand Theft Auto IV. Set within the fictional state of San Andreas, based on Southern California, the single-player story follows three criminals and their efforts to commit heists while under pressure from a government agency. The open world design lets players freely roam San Andreas’ open countryside and the fictional city of Los Santos, based on Los Angeles.

The game is played from either a third-person or first-person perspective, and its world is navigated on foot or by vehicle. Players control the three lead protagonists throughout single-player and switch between them both during and outside missions. The story is centred on the heist sequences, and many missions involve shooting and driving gameplay. A “wanted” system governs the aggression of law enforcement response to players who commit crimes. Grand Theft Auto Online, the game’s online multiplayer mode, lets up to 30 players engage in a variety of different cooperative and competitive game modes. 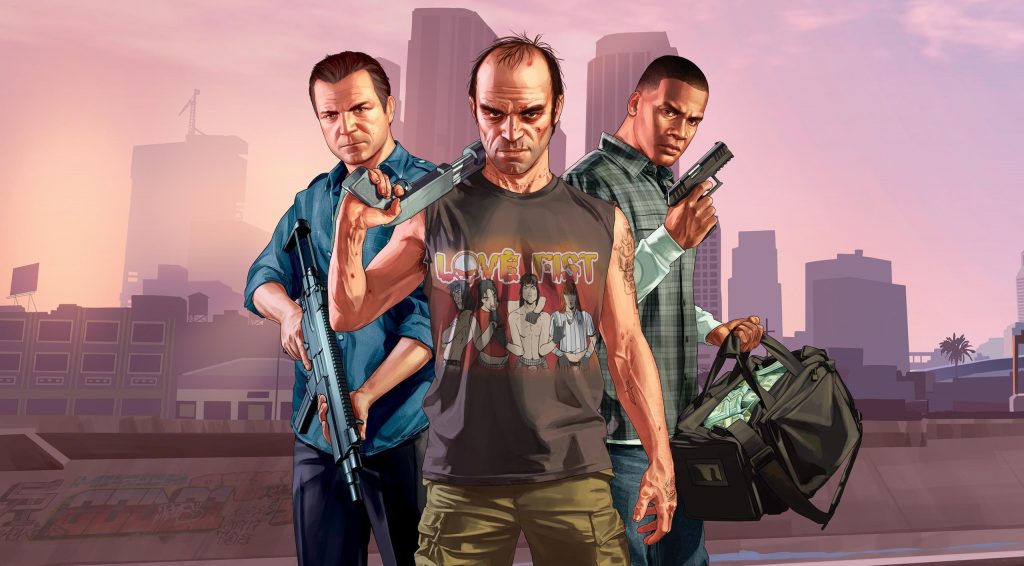 The game’s development began soon after Grand Theft Auto IV’s release and was shared between many of Rockstar’s studios worldwide. The development team drew influence from many of their previous projects such as Red Dead Redemption and Max Payne 3 and designed the game around three lead protagonists to innovate on the core structure of its predecessors. Much of the development work constituted the open world’s creation, and several team members conducted field research around California to capture footage for the design team. The game’s soundtrack features an original score composed by a team of producers who collaborated over several years.

Extensively marketed and widely anticipated, the game broke industry sales records and became the fastest-selling entertainment product in history, earning $800 million in its first day and $1 billion in its first three days. It received widespread critical acclaim, with praise directed at its multiple protagonist design, open world, presentation and gameplay. However, it caused controversies related to its depiction of violence and women. Considered one of seventh and eighth generation console gaming’s most significant titles and among the best video games ever made, it won year-end accolades including Game of the Year awards from several gaming publications. It is the third best-selling video game of all time with over 115 million copies shipped and one of the most financially successful entertainment products of all time, with about $6 billion in worldwide revenue.

Grand Theft Auto V is an action-adventure game played from either a third-person or first-person perspective. Players complete missions—linear scenarios with set objectives—to progress through the story. Outside of the missions, players may freely roam the open world. Composed of the San Andreas open countryside area, including the fictional Blaine County, and the fictional city of Los Santos, the world is much larger in area than earlier entries in the series. It may be fully explored after the game’s beginning without restriction, although story progress unlocks more gameplay content.

The player character crouched behind a vehicle while in combat. The head-up display elements are visible on-screen.
Players may take cover behind objects during firefights to avoid taking damage from enemies.
Players use melee attacks, firearms and explosives to fight enemies, and may run, jump, swim or use vehicles to navigate the world. To accommodate the map’s size, the game introduces vehicle types absent in its predecessor Grand Theft Auto IV, such as fixed-wing aircraft. In combat, auto-aim and a cover system may be used as assistance against enemies. Should players take damage, their health meter will gradually regenerate to its halfway point. Players respawn at hospitals when their health depletes. If players commit crimes, law enforcement agencies may respond as indicated by a “wanted” meter in the head-up display (HUD). Stars displayed on the meter indicate the current wanted level (for example, at the maximum five-star level, police helicopters and SWAT teams swarm to lethally dispatch players). Law enforcement officers will search for players who leave the wanted vicinity. The meter enters a cool-down mode and eventually recedes when players are hidden from the officers’ line of sight that displays on the mini-map.

The single-player mode lets players control three characters: Michael De Santa, Trevor Philips and Franklin Clinton—criminals whose stories interconnect as they complete missions. Some missions are completed with only one character and others feature two or three. Outside the missions, players may switch between characters at will by a directional compass on the HUD. The game may switch characters automatically during missions to complete specific objectives. A character’s compass avatar will flash red if he is in danger and needs help, and flash white if he has a strategic advantage. Though players complete missions as any of the three protagonists, the more difficult heist missions require aid from AI-controlled accomplices with unique skill sets like computer hacking and driving. If an accomplice survives a successful heist, they take a cut from the cash reward and may be available for later missions with improvements to their unique skills. Some heists afford multiple strategies; in a holdup mission, players may either stealthily subdue civilians with an incapacitating agent or conspicuously storm the venue with guns drawn.

Each character has a set of eight skills that represent their ability in specific areas such as shooting and driving. Though skills improve through play, each character has a skill with expertise by default (e.g. Trevor’s flying skill). The eighth “special” skill determines the effectiveness in performing an ability that is unique to each respective character. Michael enters bullet time in combat, Franklin slows down time while driving, and Trevor deals twice as much damage to enemies while taking half as much in combat. A meter on each character’s HUD depletes when an ability is being used and regenerates when players perform skilful actions (for example, drifting in vehicles as Franklin or performing headshots as Michael).

While free-roaming the game world, players may engage in context-specific activities such as scuba diving and BASE jumping. Each character has a smartphone for contacting friends, starting activities and accessing an in-game Internet. The Internet lets players trade in stocks via a stock market. Players may purchase properties such as garages and businesses, upgrade the weapons and vehicles in each character’s arsenal. Players may also visit places such as cinemas and strip clubs. Players can also customise their appearance by purchasing outfits, haircuts and tattoos.