Counter-Strike: Global Offensive (CS:GO) is a multiplayer first-person shooter video game developed by Hidden Path Entertainment and Valve Corporation. It is the fourth game in the Counter-Strike series and was released for Microsoft Windows, OS X, Xbox 360, and PlayStation 3 on August 21, 2012, while the Linux version was released in 2014.

The game pits two teams against each other: the Terrorists and the Counter-Terrorists. Both sides are tasked with eliminating the other while also completing separate objectives. The Terrorists, depending on the game mode, must either plant the bomb or defend the hostages, while the Counter-Terrorists must either prevent the bomb from being planted, defuse the bomb, or rescue the hostages. There are nine game modes, all of which have distinct characteristics specific to that mode. The game also has matchmaking support that allows players to play on dedicated Valve servers, as well as allowing members of the community to host their own servers with custom maps and game modes. A battle-royale game-mode, “Danger Zone”, was introduced in 2018. 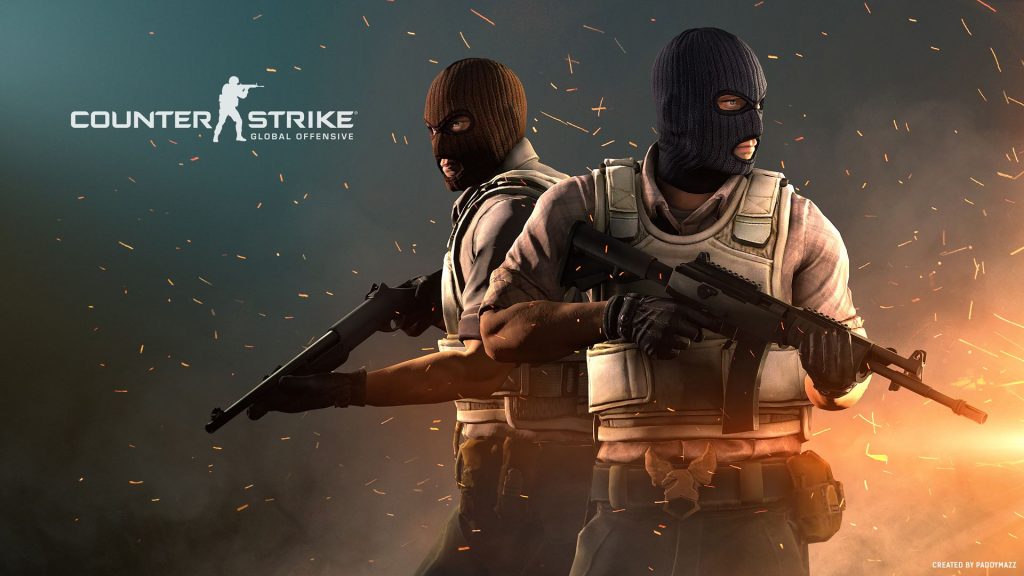 Global Offensive received positive reviews from critics on release, who praised for its gameplay and faithfulness to predecessors, though it was criticized for some of its early features and was noted for differences between the console and PC versions. Since its release, it has drawn in an estimated 11 million players per month, and has gathered an active competitive scene, with many tournaments sponsored by Valve themselves. In December 2018, Valve transitioned the game to a free-to-play model, focusing on revenue from cosmetic items.

Gameplay
Global Offensive, like prior games in the Counter-Strike series, is an objective-based, multiplayer first-person shooter. Two opposing teams, known as the Terrorists and the Counter-Terrorists, compete in game modes to complete objectives, such as securing a location to plant or defuse a bomb and rescuing or guarding hostages. At the end of each round, players are rewarded based on their individual performance with in-game currency to spend on other weapons or utility in subsequent rounds. Winning rounds rewards more money than losing does, and completing objectives such as killing enemies gives cash bonuses. Uncooperative actions, such as killing teammates, results in a penalty.

An in-progress match on Dust II, in which the player is using an AK-47
There are five categories of purchasable weapons, four being guns and the final being utilities: rifles, sub-machine guns (SMGs), heavy, pistols, and grenades. All guns have different properties and all grenade types have different in-game effects. The hand grenade (HE) deals damage in a small radius, the smoke grenade temporarily places a smoke screen, the decoy grenade emulates the player’s primary gun, the flashbang temporarily blinds players who look towards it when it explodes, and the Molotov cocktail and Incendiary Grenade set a small part of the map on fire for a short period of time. Alongside all of the main weapons, the Zeus x27, a taser, can also be purchased.
Global Offensive has nine main game modes: Competitive, Casual, Deathmatch, Arms Race, Demolition, Wingman, Flying Scoutsman, Danger Zone, and Weapons Course. Competitive mode pits players against each other in two teams of five players in roughly 45-minute matches. The Casual and Deathmatch modes are less serious than Competitive mode and do not register friendly fire or collision with other teammates. Both are primarily used as a practice tool. Arms Race is similar to the “Gun Game” mod for other games in the series. It consists of players racing to upgrade their guns via killing enemies. Demolition is also like the “Gun Game” mod, though players are also able to plant and defuse the bomb. Players only receive gun upgrades at the start of new rounds if they killed an enemy the previous round. Wingman is a two-on-two bomb defusal game-mode taking place over fifteen rounds. It is similar to Competitive in the sense that players are paired based on their skill levels. Flying Scoutsman is a mode in which players are equipped only with a SSG 08 and a knife while they play in low-gravity. The Flying Scoutsman, Demolition, and Arms Race game modes are placed in the War Games tab. Danger Zone is a battle-royale mode in which players play against up to 16 or 18 others. Everyone starts with a knife and a tablet and have to search for weapons, ammunition, equipment, and money. Through the tablet, players can purchase certain weapons, ammunition, and equipment with money found around the map inside buildings and in completing objectives such as returning hostages to the rescue zones. When a player purchases an item, it is delivered to them from a drone that goes to their location and drops the item. The tablet is also used for tracking other players.The last person or team alive wins, like other battle-royale games.
] The Weapons Course is an offline practice mode designed to help new players learn how to use guns and grenades, as well as defusing and planting the bomb. Apart from the Weapons Course, all seven other game modes can be played online or offline with bots.
Matchmaking is supported for all online game modes and is managed through the Steam software. These matches run Valve Anti-Cheat to prevent cheating. In Competitive mode, players are encouraged to act more cautiously in Global Offensive than in most other multiplayer games due to the inability to respawn once killed. When playing Competitive, each player has a specific rank based on their skill level and is paired up with other players around the same ranking. One form of matchmaking in Global Offensive to prevent cheating, Prime Matchmaking, hosts matches that can only be played with other users with the “Prime” feature. This feature also results in more equal matches as there are fewer “smurfs” in these matches. The PC version of Global Offensive also supports private dedicated servers that players may connect to through the community server menu in-game. These servers may be heavily modified and can drastically differ from the base game modes. There have been many community made mods for the game, one of the popular ones being “kz”, a mod that makes players complete obstacle courses requiring advanced strafing and jumping techniques.

Over time, the community developed strategies for competitive play. When trying to capture a site, a common strategy used is called “rushing”. Rushing is when a player or group of players move into a choke-point on the map as fast as possible. This strategy is used commonly when one of the teams is running an “eco”. An eco is used usually when a team has a lack of money to buy weapons, utility, or armor, forcing the team to be left with less effective weapons and little utility. “Eco rounds” are rounds in which a team will buy few or no guns in order to save up money for future rounds. Occasionally, when it is known a team is low on money, the opposition will purchase “anti-eco” weapons which perform well at close range. This is to prevent casualties and financial bonuses for the opponents. Rushing is also used if there is a lack of time on the clock and the bomb needs to be planted or defused in an act of desperation. Another common strategy for taking a site is using predetermined smoke grenades and flashbangs to hinder enemies’ sight.

Global Offensive saw the introduction of new weapons and equipment not seen in previous installments, most notably the firebomb for each team (referred to as a Molotov on the Terrorist side and as an Incendiary Grenade on the Counter-Terrorist side). These temporarily cover a small area in fire, dealing damage to anyone passing through. Global Offensive also saw the introduction of a range of new weapons, including shotguns, pistols, sub-machine guns, and a taser. Two new game modes, Arms Race and Demolition, both based on mods for previous iterations in the series, were added alongside a total of eight new maps for said game modes. Global Offensive saw the removal of features seen in previous iterations of the series. The ability to freely explore the map when dead was removed from many modes, though server hosts are able to change this setting. Upon the game’s release, the USP and the MP5 were replaced by other guns; however, silenced versions of both guns have since been added. The tactical shield was also removed. The concept of sprays were not present in the game until the addition of consumable items called graffiti.