Geometry Dash is a series of five video games developed by Sweden-based developer Robert Topala, and published by his own company, RobTop Games. The principal game, Geometry Dash, is a rhythm-based platforming game which currently has 21 official levels and a game creation system with more than 50 million online levels made by players. Each of the official levels features unique background music. Other features include “map packs”, secret vaults, and a variety of icons and game modes.

The beginning of Electroman Adventures, an insane difficulty official level in the game.
Geometry Dash uses a touchscreen or keyboard/mouse (depending on version) to control different vehicles that react when a player presses anywhere on the touchscreen and can be held down to constantly interact with certain vehicles. Users cannot control the speed at which the icon is moving. The timing and rhythm of the in-game music are key parts of the game, often in relation to each other. The objective of the game is to complete a level by reaching its end. If the player crashes into an obstacle, they will have to start over from the beginning. The player-character can take up to seven separate forms, which behave differently with each interaction. The vehicle the character takes is changed by seven portals, each of which is a different color. The behavior of these modes can be changed further, such as reversing the game view or adding a second player-character. 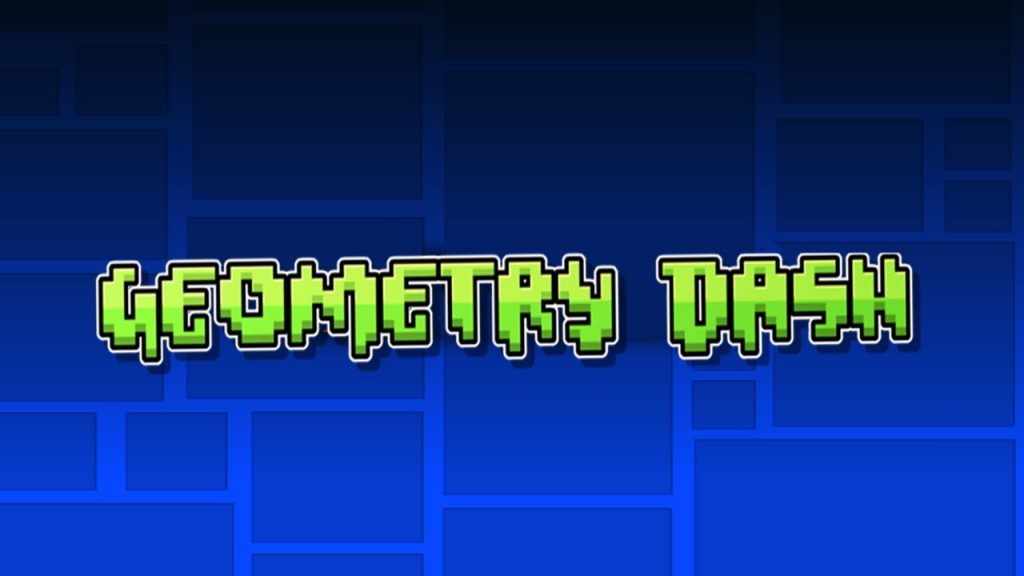 There are 21 official levels in the full version of Geometry Dash, 18 of which are unlocked from the start. Each level grants rewards upon completion. Each official level has 3 secret coins, which are used to unlock the three locked levels. Levels are classified by difficulty, and each difficulty give a certain number of stars depending on difficulty. Players can play the levels in almost any order. Players can also earn achievements which may be exchanged for rewards. Players may also utilize a shop, where they can spend an in-game currency called “mana orbs”, collected through completing levels. Geometry Dash has a practice mode that can be used for any level which allows the player to restart at manually placed checkpoints instead of the very beginning. A level cannot be officially completed on practice mode, though completion can lead to certain rewards. The paid full version features the ability to upload and download user-created levels. The player must complete their level with all coins in normal mode in order to ensure that it is possible to beat before it can be uploaded. Changes after the verification will render it unverified. The difficulty setting is determined by Robert Topala; the creator of a given level, its players, and moderators capable of sending
levels can influence this decision.

Geometry Dash Meltdown
On December 16, 2015, RobTop announced a spin-off game called Geometry Dash Meltdown, which was released on December 19, 2015 for iOS and Android. Currently (as of update 1.0) it includes 3 levels (featuring the songs of F-777) with new icons from version 2.1 made to showcase the 2.0 features to those who do not own the full version.

Geometry Dash World
On December 21, 2016, RobTop announced the newest spin-off game called Geometry Dash World, saying that he would leave on the same day. Currently (as of update 1.0) includes 2 worlds with 5 levels in each world, new 2.1 icons, a shop, a new vault, daily quests, levels & rewards, and secret chests made to showcase some of the new 2.1 features that were included in the update of the full version.