One Piece: Stampede (Japanese: ワンピーススタンピード Hepburn: Wan Pīsu Sutanpīdo) is a 2019 Japanese animated fantasy action adventure film directed by Takashi Otsuka and produced by Toei Animation. It is the fourteenth feature film of the One Piece film series, based on the manga of the same name written and illustrated by Eiichiro Oda, and commemorates the anime’s 20th anniversary. Oda is involved with the film as Creative Supervisor. It had its world premiere at the Osaka Station City Cinema in Osaka on August 1, 2019, and later released in Japan on August 9, 2019.

The Straw Hat Pirates come to Delta Island for the Pirate Fest, a large pirate gathering organized by festivities master Buena Festa. Festa sends the pirates to a floating island to hunt for a treasure that belonged to the Pirate King, Gol D. Roger. The Straw Hats and many other pirate crews, including those from the Worst Generation as well as the Buggy Pirates, Foxy Pirates, Barto Club, and Beautiful Pirates, set sail on a Knock Up Stream and do battle with each other as they race toward the treasure. However, this event is secretly set up as part of a plan between Festa and the legendary pirate Douglas Bullet. Trafalgar Law discovers this scheming and is attacked, but manages to make his way onto the Thousand Sunny and tell the Straw Hats about something suspicious going on. Robin, Sanji, Chopper and Brook go with him to investigate, and the undercover Marine Smoker goes to investigate himself as well. After sneaking into Festa’s hideout, Law’s group discovers that he has conspired with the Marines to send a Buster Call on Delta Island, which would destroy it and everyone on it. 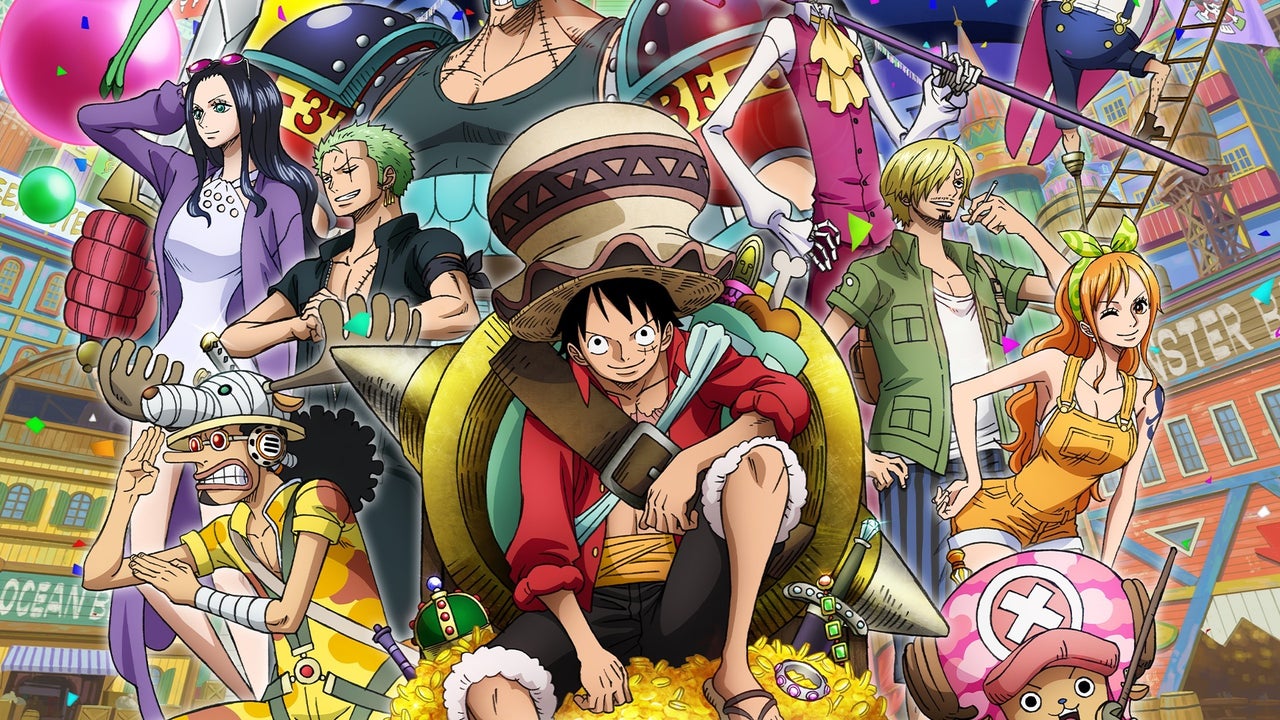 Buggy manages to seize Roger’s treasure, but a galleon comes up the Knock Up Stream and barrages the floating island with cannon fire, destroying it. The pirates are sent falling into the bay below, and Usopp seizes Roger’s treasure, but Douglas Bullet then comes in and swiftly defeats him to take it back. Buggy recognizes Bullet as a powerful former member of Roger’s crew, and Bullet challenges the members of the Worst Generation to a fight. Luffy and the other Worst Generation members are unable to overcome Bullet’s brute strength and are quickly overwhelmed by him. Bullet uses his Clank-Clank Fruit powers to create and inhabit a fighting machine, which he uses to thoroughly defeat Luffy and the pirates. He attempts to kill Luffy, but Usopp shoots at his machine to no avail, causing Bullet to attack him. Meanwhile, the other pirates attempt to flee from Delta Island, only to find the Marine Buster Call fleet headed toward them.

As the pirates fight the Marines, Law’s group encounters Smoker in Festa’s lair, who captures Brook and Chopper and battles Sanji while Law and Robin escape to continue onward. Sanji reveals to Smoker that Festa arranged for a Buster Call to arrive. Smoker was unaware of this and realizes that the Marines were set up. Meanwhile, Law and Robin into run into the former Warlord Crocodile, who wants to involve Law in a plan. Bullet then confronts the Buster Call fleet and reveals his Awakened Devil Fruit powers, allowing him to tear apart the fleet as well as the town around him and form it into a colossus the size of a mountain. While inhabiting the colossus, Bullet is able to split the island apart with a single punch, and easily overwhelms the pirates and Marines around him. Festa reveals that the treasure in Bullet’s possession is an Eternal Pose that can guide ships to Laugh Tale, the location of the most famous treasure One Piece. With Bullet’s dream being to become Pirate King by defeating the world’s most powerful people, Festa intends to use his warpath and treasure to start a new era. After hearing about what Bullet has done, Marine Fleet Admiral Sakazuki orders a second Buster Call to attack the island.

Sanji, Robin, Chopper, and Brook meet up again, with the former two attempting to find a way to escape the island while the latter two look for Luffy. Chopper and Brook find Luffy and Usopp half dead, and Chopper gives them some treatment. After regaining consciousness, Luffy immediately sets off to attack Bullet, although is immediately overwhelmed. The Warlord Boa Hancock attempts to find Luffy, and she does so while running into Buggy, Smoker, Law, and the Revolutionary Army member Sabo in the process. Law shares his plan to defeat Bullet by tearing apart his colossus, and Crocodile joins them to help their combined attacks destroy one of its arms. Luffy then activates Gear Fourth and massively balloons his arm as he clashes with Bullet’s colossus, ultimately overpowering it. Bullet then attacks Luffy in his fighting machine, but the shots Usopp fired at it grow into large plants that destroy it. Luffy and Bullet then engage in a fistfight, and Luffy ultimately emerges the victor.

Crocodile and Rob Lucci each attempt to obtain the Eternal Pose, but Luffy destroys it due to not finding a use for it. Festa mourns the failure of his plans, and is defeated and captured by Sabo. Luffy reunites with his crew and they attempt to escape along with the other pirates, but are confronted by the second Buster Call fleet. However, Smoker contacts his superiors to say there is no longer a need for the Buster Call, and Sabo creates a wall of fire that allows the pirates to pass through the fleet safely.

In a post-credit scene it’s revealed that Roger disapproved of his crew member making the Eternal Pose and threw it away, believing that the One Piece can’t be obtained by someone who would rely on such a thing. Back in the present everyone is shocked that Luffy destroyed the Eternal Pose, though Usopp isn’t surprised by his actions. Luffy justifies himself stating that if that they’d took it, they would’ve missed out on many great adventures.