Before Jon Rahm was even born, the crème de la crème of the golfing sport like Tiger Woods and Fred Couples were already known names. Still, Jon has managed to make his own success. He has burst onto the scene and has left no doubt in anyone’s mind about his potential. It is impossible to disagree that Jon has a long and successful career ahead of him.

Jon Rahm may be living his dream in the United States but he was born in Barrika, in Basque Country, Spain, on November 10, 1994. Rahm moved to the US for his college education. Here, he attended Arizona State University. While there, he played for the school’s golf team, the Arizona State Sun Devils. It was here that young Rahm started to make his mark. He set a collegiate golf record of winning eleven tournaments. A record that was bested only by Phil Mickelson‘s 16 college tournament wins. 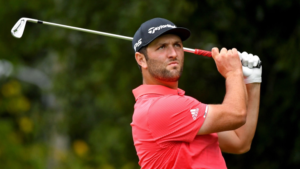 In the 2014 edition of the Eisenhower Trophy, he emerged the individual winner. Perhaps the biggest accolade of Jon Rahm’s amateur career is that he is the only golfer ever to spend a record 60 weeks at the top spot of the World Amateur Golf Ranking. His first stint started on April 1, 2015, and lasted for 25 weeks. He would later lose the top spot, regain it and maintain it for another 35 weeks.

Jon Rahm also went on to win the Ben Hogan Award two years in a row, in 2015 and 2016. Prior to him, no player had received the award more than once. Unfortunately, his advancement in 2015 to the U.S. Amateur would see him lose to Derek Bard in the quarterfinals. He ended his collegiate career on a high by winning the Pac-12 Conference championship. In the same year, he also secured the NCAA regional championship and advanced to the national championship where he finished in third place.